Let's take a taxicab ride through Manhattan in New York City. We're starting from a point in the upper west side down to the lower east side. On this trip, we want to see as much of the city as possible. We want to see all the streets and avenues because we've never been here before. In NYC, streets and avenues intersect and form a grid–The 1811 Commissioner's plan created this almost perfect matrix. To simplify things, let's say we are in a perfect grid–no Broadway or Central Park–and that we can only travel either east or south. If we always start from the same point in the upper west side, these trips will resemble paths known as Lattice Paths.

What is a Lattice, and a Lattice Path?

A lattice is a set of repeating points arranged in a pattern. The following is a square lattice in 2-dimensional space (we can have other arrangements, such as rectangular or hexagonal lattices and in higher dimensions). The points form a mesh of squares.

Then a lattice path is a sequence of steps connecting adjacent lattice points. Also, we restrict the direction in which we can move. In our case, we can only go east or south.

Here's a valid lattice path with only east and south moves. This path starts at the northwest corner and ends at the opposite southeast corner.

Now, imagine that each dot in the lattice is a street intersection, and the lines connecting each dot is a street or avenue. Then each square represents a block. We want to count all possible trips that we need to make to get from the northwest corner, down to the southeast corner. There are a few ways in which we can count these paths.

As an example, let's count all possible lattice paths in a 2x2 square lattice–that is, an area of two blocks by two blocks. Six unique paths start from the upper left corner. The figure below illustrates this point.

Now, we're going to see a few methods to count lattice paths. We can use these for lattices of any size.

One way to count lattice paths is just as we did above. We count the paths by adding the number of ways in which we can reach each dot in the lattice–remembering that we can only go east or south and that we always start from the same origin. In the 4x4 lattice below, the blue and red paths indicate two possible ways to get to the first southeast dot. So, we marked it with a 2. 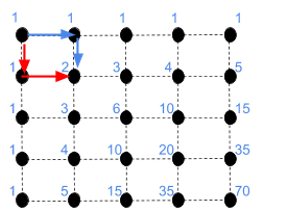 The next figure shows three ways to get to the next dot–indicated by the blue, green, and red paths. We marked it with a 3. 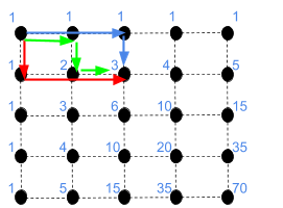 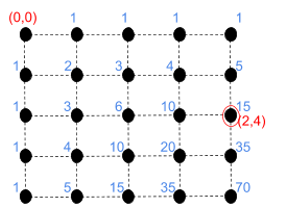 That is the same as the combination formula we used above.

The coefficients in the expansion are 1, 4, 6, 4, 1. Using our formula, we can obtain each of these coefficients by substituting $n$ with 4 and $k$ with the position–starting from zero–of each coefficient. For example, the 2nd coefficient is 6, and we obtain it by computing:

The count of lattice paths is equal to the number of combinations and equivalent to the binomial coefficients.

Similarly, there's yet another way to count the number of lattice paths in a $k\times n$ lattice. We know that Pascal's triangle arranges the binomial coefficients. To construct Pascal's triangle, we start by setting 1's as the outer terms on each row: 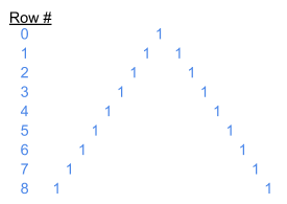 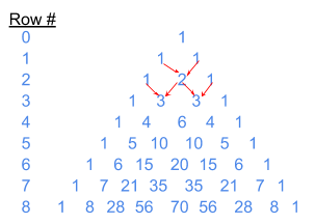 Notice that if we rotate our 4x4 lattice from before, we get Pascal's triangle (with some missing terms at the bottom): 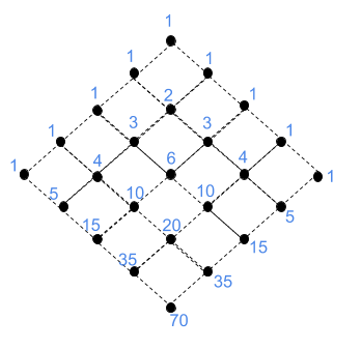 Also, if we draw a straight line from the top of Pascal's triangle to its base, it will "cross out" all the binomial coefficients corresponding to the number of paths in square lattices of different sizes: 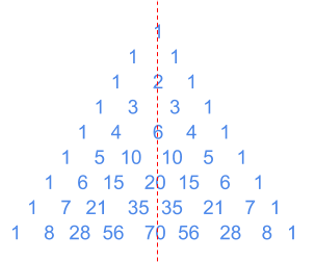 In the triangle above, the line crosses the terms 1, 2, 6, 20, and 70. If we assign an index to these terms–starting from zero–the 4th term is 70. That is the number of lattice paths in a 4x4 lattice. In a 2x2 lattice, the number of paths is equal to the 2nd crossed-out term, which is 6. Just as we found at the beginning, with our 2x2 lattice example.

There are always different–but equally correct–ways to do things. Just because something is different, it doesn't mean it's wrong. Whether one method is better than the others depends on your specific use case.