My previous article served as a quick introduction to the general concept of public-key cryptography. If you're not familiar–or would like a refresher–with the concepts of public/private keys, encryption/decryption, I suggest reading that article first. Also, knowledge of basic algebra and calculus is useful–although not necessary. I'll try my best to explain how all this works.

What Is an Elliptic Curve?

Where $A$ and $B$ are constants. This equation is called the Weierstrass equation. The graph below shows an elliptic curve over the real numbers $\mathbb{R}$. 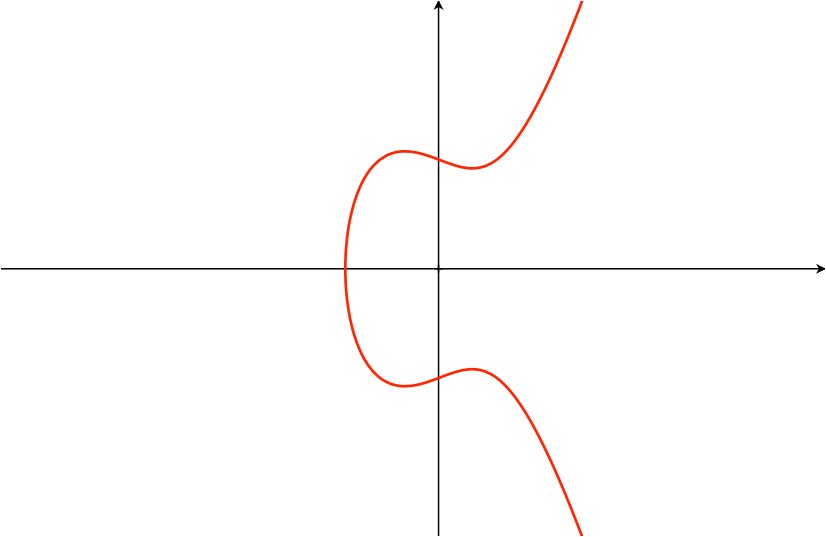 In ECC, we define elliptic curves over finite fields. This means that there's a finite number of points $(x,y)$ in the group (formed by the elliptic curve defined over the finite field). More precisely, the points in an elliptic curve from an additive abelian group. Abelian groups have interesting properties, which are useful for our cryptographic purposes. Let's first take a look at them.

An abelian group–also called a commutative group–consists of a set, together with an operation. In our case, the set consists of all the possible values for $x, y, A$ and $B$ in the Weierstrass equation. Also, we include an especial point–called the point at infinity–in our set. As we'll see later, this point is quite useful. Then the operation for our group is addition–hence the name additive abelian group 1. We denote it as $(A, +)$, where $A$ is our set, and $+$ is the operation. To be considered as abelian, the group must satisfy the abelian group axioms.

These axioms are the following:

Note that we can still perform multiplication in the usual way. If we think of multiplication as repeated addition, we can see that, if $P$ is a point on the elliptic curve and $k$ is a positive integer, then $k \cdot P = P+P+...$ ($P$ added to itself $k$ times).

We can think of the axioms as the rules that dictate what is possible inside the group.

So, we have defined elliptic curves and how they constitute an abelian group.

Now, if we were to work with elliptic curves defined over the reals–such as the one in the graph above–addition operations will quickly yield extremely large numbers. This is because the set $\mathbb{R}$ is infinite, and as $x$ increases, $E$ increases exponentially. Such large numbers will become impossible to handle by a computer. We will constrain our curves to finite fields. Working within a finite field also provides some useful properties for cryptography. In the next few sections, we'll see how elliptic curves are applied to cryptography.

The following section explains how to add two points on an elliptic curve. This is the type of operation we do when computing our public/private keys. 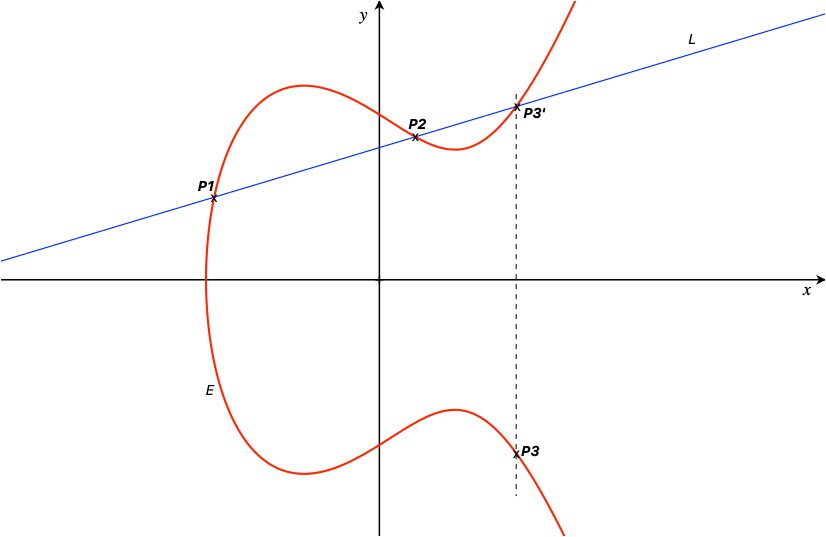 now expand the last term on the right side:

We now have a cubic polynomial whose roots are the intersection points between $E$ and $L$. In this case, we already know two of the roots, these are the $x$-coordinates of points $P_{1}$ and $P_{2}$. Namely $x_{1}$ and $x_{2}$. A common technique to find the roots of a polynomial is to factor out the equation and then set each term to $0$ to solve for the roots. We can do this to find the third root $x^{'} _{3}$. But, since we already know two of the roots, there's an easier way.

here, the terms on the left side of the equation are the three factors of the polynomial on the right side. If we were to find the roots, we set each factor to $0$ and solve for $x$. For example, the first root would be:

This is the $x$-coordinate of our third intersection point, now we just need to find the $y$-coordinate. To do this, we simply use our equation for $L$ as:

With these formulas, we can compute the $(x,y)$ coordinates of the point resulting from the addition of any two points on an elliptic curve. We just need to know $P_{1}$ and $P_{2}$.

I should say that these results are valid when $P_{1}$ and $P_{2}$ are different points on the curve, i.e. $P_{1} \neq P_{2}$. Three special cases require different calculations to find the intersection point:

where $d$ is the point at infinity. This is consistent with our "identity element" axiom.

Now that we know how to compute the addition of two points on an elliptic curve, let's explore how these concepts apply to cryptography.

As I mentioned before, in ECC we define our elliptic curve over a finite field. Moreover, the field is of prime order, and we denote it as $\mathbb{F}_{p}$. Where $p$ is a prime number, indicating the number of elements in the field. This means we can construct the field as the integers modulo $p$. For example, the curve 2

can be expressed as:

where $mod$ is the modulo operation.

Another aspect of ECC is that its security depends on the difficulty of solving the discrete logarithm problem. Other cryptosystems may rely on prime factorization for example. When $p$ is large, the existing algorithms to solve the discrete log problem are not efficient.

The discrete logarithm problem is defined as follows. Suppose $p$ is a prime number and $a,b$ positive integers. Then we have another integer $k$ so that:

The goal of the discrete logarithm problem is to find $k$. As you can see, to find $k$, we need to take the $log_{a}$ (with base $a$) on both sides of the equation. For a group comprised by an elliptic curve over the reals, this would be a rather (computationally) easy calculation. However, since our curve is defined over a finite field of prime order, solving the discrete log is hard when $p$–the field's order–is large.

Different cryptosystems use slightly different approaches, but here's an example of how this applies in practice. Let's suppose we're generating a public/private key pair, and we have defined an elliptic curve $E$ over a finite field, denoted as $E(\mathbb{F}_p)$. First, we need to select a fixed point $G$ on the curve. This point is referred to as the generator point. Then we select a private key $k$–usually a randomly chosen number. Finally, we generate a public key $K$ by computing:

$K$, $G$, and $E(\mathbb{F}_p)$ are public information. Now, we're supposed to keep $k$–the private key–secured. If an attacker wants to obtain this key, they need to be able to solve discrete logs in $E(\mathbb{F}_p)$. An easy way to see it is if we let the group's operation be multiplication (instead of addition). In this case $k \cdot G = G\cdot G\cdot G$... ($G$ multiplied by itself $k$ times). This is equivalent to calculating $G^k$, and therefore to find $k$ we need to compute the discrete log.

Cryptosystems use the discrete log problem to make it hard to guess our secret keys. There are several methods for attacking discrete logs. One example is Pollard's rho algorithm, which works for general groups. The runtime for this algorithm is $O(\sqrt{n})$, where $n$ is the group's order–in our case $p$. It's important to choose the appropriate curve and other mathematical constants–such as the group's order–to have a strong cryptosystem.

In this section, I'll briefly describe two examples of cryptosystems using ECC. I won't go into much detail, but there's plenty of resources available on the internet to learn how they work.

The Elliptic Curve Diffie-Hellman or ECDH key exchange protocol is a scheme used in data encryption. ECDH is used to establish a shared secret–using the public/private key pairs–between two parties. The key pairs are obtained using an agreed-upon elliptic curve. Once this is in place, the information can be encrypted and transmitted. This information can only be decrypted using the shared secret key.

An example for digital signatures is the Elliptic Curve Digital Signature Algorithm or ECDSA. This is an elliptic curve version of the Digital Signature Algorithm (DSA). Here, the key pair is, again, derived from an elliptic curve over a finite field. The private key is used to generate a signature, which is sent along with the message and public key. In this case, the message may or may not be encrypted 3. The receiver can then use the public key to verify that the signature is valid, thus confirming that the message came from the sender (who owns the private key).

These are only two examples of elliptic curve cryptosystems. But, there's more that work similarly. ECC is used in applications such as web browsers, messaging apps, and almost every cryptocurrency and blockchain project out there.

More advanced cryptographic systems use elliptic curve math under the hood. For example, the emerging zero-knowledge proofs and zk-SNARKS. These are powerful cryptographic constructs that allow us to prove the knowledge of certain information without revealing that information. They are relatively new, but they seem to be gaining a lot of attention. Knowing about elliptic curves can help us understand how they work and keep exploring the fascinating world of cryptography.